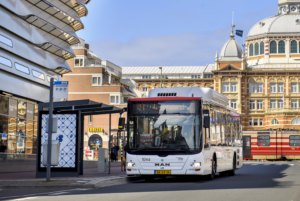 This spring, on various tram and bus lines, HTM announced extra destinations towards the coast. This is in addition to the existing tourist destinations that are already announced throughout the network. We asked whether you noticed the beach destinations and what you think of this. Around one third of participants had indeed heard these, and of these, 10% got off thanks to the announcement, although they had not planned to. 77% of participants consider that we could announce extra destinations at more stops. Particularly for tourists and the visually impaired. It was noted that the announcements should not get too long/too much.

The HTM panel is implemented by Citisens

New look for our urban tram
Scroll to top